Rich people need to take a deep breath once in awhile and understand that life will bring frustration for them as it will for most Americans. 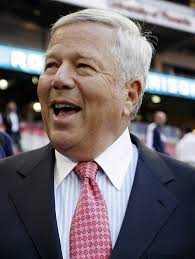 Patriots owner Robert Kraft enjoys a life that is 99.9% wonderful, but he continues to carp about the 0.1% that is like the rest of us.

New England Patriots owner Robert Kraft was mindbogglingly pious and entitled is his outrage yesterday over the penalties that NFL Commissioner Roger Goodell upheld for his fair-haired, perfect, adopted son Tom Brady, and it served as a reminder that the really rich among us simply assume that everything in the world will conform to their sense of justice – which is by definition perverted by their own largesse.

Among Kraft’s absurd and self-righteous declarations:

Wow, what a steaming pile of disgruntled indignation.  The Reader’s Digest version of Kraft’s meltdown is, “Because I believe in Tom Brady’s innocence, everyone else should too.  People always seat me at the head of the table and listen to what I say while nodding vigorously in the affirmative, but this time people outside the fans in New England aren’t.

“That means the NFL and media must have conspired to manipulate facts that do not comport to my beliefs in an effort to persecute Tom Brady and thus annoy me.”

Humility does not come easily to people of incredible and outrageous means.  The universe revolves around them, and any bad that comes is always part of a conspiracy to directly cause them harm.  The good is just what life is supposed to hand them because their money says they are due all they covet.

Well, welcome to real life, Bob.  Just because you are on top of the mountain doesn’t mean the stench from the crap that relentlessly rolls downhill won’t reach your nostrils on occasion.

Life isn’t fair for anyone, but only rich patriarchal schlubs have the temerity to blather incessantly about the very few times a business episode out of their direct control wobbles a bit and brings a little pain.

Like we needed another reason to root against the Patriots.

2 thoughts on “Welcome to real life, Bob Kraft – Deflategate brings justice beyond his control into life of billionaire”