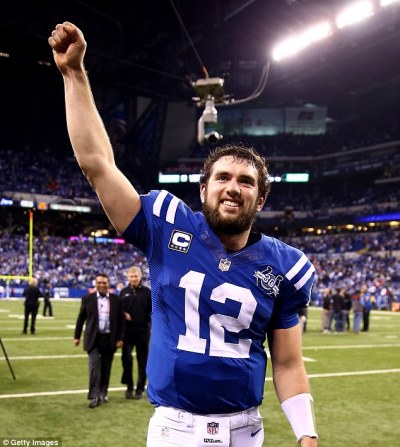 This is the image Colts fans hope to see in Santa Clara on February 7, 2016.

The Indianapolis Colts report tomorrow to training camp in Anderson hoping the season for which they prepare ends at Super Bowl L in Santa Clara, California, on February 7th.

There is a lot of work to be done between now and then for the Colts to claim a spot ahead of the Patriots, Broncos, and Steelers, and questions abound about this unit led by the best young quarterback in the NFL.

Andrew Luck is the lynchpin – that thing that serves as the biggest point of differentiation between the Colts and everyone else.  This is nothing new for the Colts, who were said to be a 2-14 team if anything ever happened to previous franchise quarterback Peyton Manning.  That dire prediction was proven accurate in 2011 as the Colts tanked following Manning’s neck surgeries which sidelined him for that now forgotten season.

Assuming Luck takes another step in the right direction during his fourth season, the Colts are still rife with question marks that need to be answered in the affirmative if they are to be pulled into championship level greatness by the splendid Luck.

5 – Can Phillip Dorsett provide a boost to special teams and make the Colts offense even more difficult to scheme against?  Dorsett is fast – so fast that he is obviously faster among men paid a lot of money because they are fast – but can he be fast when the threat of being pummeled comes in every closing stride of an opposing safety?  This is important for the 2015 season, but maybe even more important next year when the Colts might choose to invest elsewhere the $10M-$14M per season experts estimate T.Y. Hilton will command if Dorsett is seen as his equal.

4 – Will the aging mediocrity in the middle of the defense be exposed?  The Colts have a bunch of okay in the five defensive positions in the middle of their defense.  Art Jones can be a run stuffer when healthy, but if the DT can’t stay on the field or ages, he won’t help.  Middle linebackers D’Qwell Jackson and Jerrell Freeman are good and earnest men who will try like hell, but neither is a dynamic game changer.  Freeman can cover, but Jackson’s abilities in coverage have eroded.  At safety, Mike Adams squeezed a lot of positive plays out of his 33-year-old body last season, but age catches up with us all eventually – just ask Reggie Wayne.  Dwight Lowery, 29, was signed as a free agent, and might be the 2015 version of Adams.

3 – Is the pass rush going to change games?  So much has to do with the ability of Robert Mathis to return to a level of health from a torn Achilles that allows him to get the edge of NFL tackles as he has throughout his career.  Free agent acquisition Jason Cole, 32, is also a high risk/high reward addition.  Bjorn Werner needs to reward the faith shown by GM Ryan Grigson when he was taken in the first round of the 2013 NFL Draft.  Jonathan Newsome posted a team high 6.5 sacks in his rookie season.  Was it a flash in the pan?  Can Newsome take a step forward this year, or was 2014 a fluke?  Lot of questions.

2 – Can elderly future hall of famers squeeze some championship level football out of their decaying carcasses?  Frank Gore is a very young man relative to attorneys or physicians, but as a running back in the NFL, 32 is ancient.  Andre Johnson is 34, but healthy and still capable of compelling his body into productivity through superior intellect and experience.  While receivers Hilton, Dorsett, Donte Moncrief, and tight ends Dwayne Allen and Coby Fleener form a core of quality weapons, Johnson and particularly Gore will be asked to perform at a hall of fame level for yet another season as each tries to capture his first Super Bowl championship.

1 – Will the offensive line be able to keep Andrew Luck clean and open holes for Gore?  Gosder Cherilus was waived this month, and that means either the Colts felt Cherilus was completely incapable of blocking anybody, or they loved Jack Mewhort at right tackle.  Maybe it was both.  The center position was a source of worry last year as A.Q. Shipley, Jonotthan Harrison, and Khaled Holmes rotated through multiple starts.  Shipley is gone, but who the #1 center will be is still uncertain.  Left tackle is the only predictably solid spot with Anthony Castonzo.  Joe Reitz, free agent acquisition Todd Herremans, Lance Louis, Donald Thomas, and Hugh Thornton are the candidates for guards.  When you have five guards and two centers who might start, you either have great depth or vast mediocrity.  Time will tell for the Colts.

Luck, cornerbacks, tight ends, and special teams are capable of great play for the Colts, but can the rest do enough to close the gap between what the Colts expectations are and that brutal 45-7 AFC Championship ass kicking still so fresh in the minds of the team and fans?

I guess there was only one meaningful question.