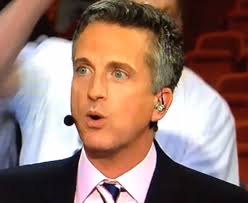 Bill “Weak Sauce” Simmons – soon to be an easier to avoid annoyance on HBO.

Bill Simmons carps.  It’s on his business card – “Bill Simmons – Carper-at-large”.  Or it should be.  So it was no surprise when he petulantly railed against Colts general manager Ryan Grigson yesterday for “squealing” on the Patriots for Deflategate..

Simmons attacked Grigson in a series of tweets that alternately expressed disgust over Grigson ratting out the Patriots for illegally deflating footballs prior to last season’s AFC Championship – and for trading a first round pick for running back Trent Richardson.

The Patriots cheat, but Grigson should be blamed.  The Patriots cheat, so yelp about trading for Richardson.  That’s the kind of self-righteous and gloriously inept banter upon which Simmons has built his career – a career that took him into and then right out of ESPN.

The Patriots cheated – not exactly an aberration from their previous behavior.  That’s the story.  Their culture rewards winning above all else, and that rules are skirted or trampled in the process is of only collateral concern to owner Robert Kraft and coach Bill Belichick as they proudly raise Lombardi Trophies.

If Simmons really wanted to express righteous indignation, there are plenty of worthy targets in this mess – Tom Brady who at least knew of the practice of deflating the game balls, Belichick for creating the culture that led to the rule violation, or Kraft for acting like the father of an unrepentant criminal who refuses to accept the moral turpitude of his progeny.

But he chooses Grigson for his decision to alert Kravitz and for the Richardson trade.  While that deal was a disaster and will certainly be a part of any reasonable discussion about Grigson’s reign as Colts GM, there have been other deals that counter it.  Vontae Davis was acquired by Grigson in a similar trade, and it can be argued that Davis is every bit as important to the Colts defense as all-world quarterback is to the offense – well, kind of.

Here is what Simmons tweeted:

“To Grigson, scouting is not just a skill. It’s a state of mind, and it doesn’t stop when the film does.” TRADED A 1ST FOR TRENT RICHARDSON.

Grigson thinks of his roster as a bonsai tree. “I am constantly pruning it,” he says. AGAIN, HE TRADED A FIRST FOR TRENT RICHARDSON.

“We have a mind-set where we want to build a dynasty,” Grigson says, “because we have the QB to do it.” BUT HE KEEPS BLOWING 1ST ROUND PICKS

After game, damaging info is leaked to local Indy columnist and then a national columnist as well… And we are off…

Patriots fans like Simmons are reluctant to look in the mirror and see the darkness that nests in the souls of those who embrace the evil inherent in an ends justifies the means life philosophy, and that’s understandable.

When tired of the internal argument anyone with a functional conscience must have when backing the morally bankrupt, people lash out at those who expose them, so Simmons mocks Grigson by bashing him over a single bad deal.  That a smack at Bjorn Werner didn’t follow shows Simmons isn’t just an evil apologist, but a lazy Grigson critic too.

The reasons for Simmons exile from ESPN multiply every time he tweets.  His show on HBO will be easier to avoid than his whining on ESPN, and for that sports fans everywhere other than New England can be thankful.