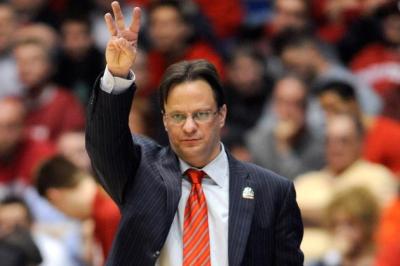 How many players were cited for illegal possession of alcohol?  No, Tom. only Emmitt Holt and Thomas Bryant got popped.

One of two things can be assumed to be true because of the relentless behavioral issues authored by basketball players – that Tom Crean understands kids will be kids and drinking will be a reality for most members of the team, or that the players have no fear whatsoever of the potential consequences Crean might wield as a corrective measure.

It’s most likely that both are at least partly true.

After Devin Davis and Hanner Mosquera-Perea were kicked off the team a couple of months ago for getting stoned in a campus dorm room, those consequences included the nuclear option.

When freshman Thomas Bryant and sophomore Emmitt Holt were cited for illegal possession of alcohol early Friday morning, they clearly judged the consequence to be worth the risk.  You remember Holt, don’t you?  He was behind the wheel when Davis fell off an SUV and suffered a severe brain injury.

How can Crean inspire respect for consequences when the biggest threat has been used and is now scoffed at?  And if Crean can’t get the attention of players off the court, can it be expected they are willing to listen to him on the court?

Indiana needs to step up in one of two ways – tell fans that underage possession citations are not a big deal – that they are part of campus life and deserve nothing more than a slap on the wrist that shows players that it’s worth a their effort to not get caught.  Or they need to admit that Crean does not have the attention of the team and the inmates are running the asylum.

One of those two things is a fact, and Indiana walking the line between them is causing a PR nightmare for the university and the program.

DUIs, positive drug tests, arrests for underage drinking/using fake IDs, and other small-to-medium potatoes mayhem have put IU Basketball in a defensive position when discussing discipline and respect for authority.

The expectations for a winning basketball team at Indiana are built on a creaky foundation of hope, and the behavior of players is so consistently aberrant that people now shrug when news of arrests, citations, or positive tests is made public.

That is the current state of the brand of Indiana Basketball – middle of the road on the court, hoping the kids stay off the road when off the court.

There have been so many arrests/citations that people are wondering whether police are targeting basketball players or they are just too stupid to avoid law enforcement.

Whatever the reason, there is a problem in Bloomington, and trusting Crean to be part of the solution has become sillier with every transgression.

No one should expect Crean to run bed checks, live in the dorm with the players, or monitor their every movement, but an authority figure should be able to get the attention of those he leads, and that has clearly not happened with Indiana Basketball for the past 2 1/2 years.

The qualities of a great leader vary from leader to leader, but the result is always the same – respect.  The continued legal issues for Indiana basketball players show a decided lack of respect for their leader, which means either Crean has recruited a group of young men incapable of respecting their coach, or that he is a leader unworthy of their respect.

Either way, it’s time for the adults in Bloomington to have a very serious talk about the direction of Indiana University’s marquee marketing arm because unless IU wants to hang a banner as America’s best party school, the job is not getting done.

4 thoughts on “Indiana Basketball – Given more alcohol citations, time has come for IU to get honest”