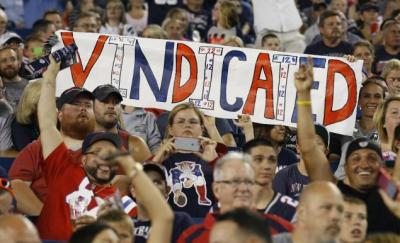 That the NFL is guilty of exercising industrial justice does not equate to innocence for Tom Brady despite his irrational fans’ insistence to the contrary.

It’s not easy to be viewed as more arrogant than Bill Belichick, Bob Kraft, and Tom Brady.  Commissioner Roger Goodell and the NFL have done that, but it doesn’t make Brady innocent.

I’ve read the Richard Berman decision that vacated Brady’s four-game suspension, and not once are the words exonerate, innocent, or vindicate used.

They were everywhere last night in Foxboro as Patriots fans celebrated what they incorrectly perceive to be the end of Deflategate.

Berman never once implied that Brady was not guilty of the behavior that caused the issuance of the suspension by Goodell.  Writing that Goodell overreached in applying his own brand of “industrial justice” to Brady’s likely participation in the scheme to deflate footballs to gain an advantage does not equate to a finding of innocence.

The Patriots and Brady are a lot of things, but innocent is not among them.  They tirelessly strive to utilize every possible competitive advantage both inside and outside the rule book, and every once in awhile the NFL catches them.

No one begrudges the Patriots desire to win – and only a few get their panties in a wad when they cross a line in doing so.  It’s the arrogance, the haughtiness, that makes owner Bob Kraft, Belichick, and their minions, including Perfect Tom, such a loathsome bunch of cretins.

For lack of a better word, Belichick is Nixonian, and the Patriots are like Nixon’s revoltingly corrupt White House staff, for whom the ends always justified the means.

Winning is the result of a plan well executed and a culture well implemented, not evidence of righteousness nor a justification for cheating.  “We win because we are right, and we are right because we win” is the nauseating logic the Patriots and their blindly loyal sycophantic fans have embraced since Belichick’s arrival.

And Berman’s ruling is not the last word in Deflategate, so fans in New England might want to dial back their glee.  The NFL has appealed, and while their clunky legal misbehavior is no source of pride for the league or its fans, there is still a chance justice could be done.

Justice finds a way most of the time.  It finds a route to assessing a tariff from those who are presented trophies for elevating the importance of winning to a plateau where sociopathology becomes ingrained at all levels of an organization.

“Brady goes unpunished (for now), and so Brady must be innocent” is a perversion of the transitive property.  The guilty walk among us every day.  That doesn’t make us dirty, nor them clean.  It just reflects a flawed system of ferreting out the truth, and the system the NFL currently uses is exceptionally distorted.

That’s what Berman ruled yesterday – that the NFL’s lack of fairness trumps that of Brady and the Patriots.  That’s not an easy standard to attain, but it sure doesn’t make the Patriots or Brady innocent.