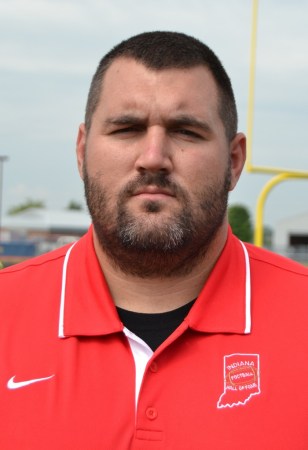 Another reason to play football is the opportunity to learn from a great coach – like New Pal’s Kyle Ralph.

The reasons not to play high school football are widely discussed, and most have to do with the long-term brain health of participants.  CTE is a fact of life for many of those who receive repeated blows to the noodle, and the results are horrifying for those who suffer from it and their families.

That’s the disclaimer to let you know that there is a risk – a potential cost – for the good stuff that comes along with playing a virtually perfect collaborative game like football.

Semi-state high school state tournament games will be played in Indiana this weekend, which means another 50% of the players still competing will survive to play in the state championship games to be contested at Lucas Oil Stadium next Friday and Saturday.  The other half will put away their pads and helmets.  Many seniors will play the final games of their lives.

There is no sport that celebrates collective effort like football.  One player can not succeed to without the other 10 doing their jobs well.  All service the same goal, and without everyone successfully executing their individual responsibilities with competence, failure is assured.

Parents are keeping their kids from playing football as a response to the highly publicized ravages of brain injuries.  We want to protect our children, but need to realize there is a cost for that safety.

It bears mention that I didn’t play football, and neither did my son, so I’m not coming at this through personal experience.  This is not a nostalgic look back, but a look at the results of experiences friends and acquaintances enjoy because they played at a wide variety of levels.

Here are my top 6 positives of playing high school football:

1 – Life-long friends.  There might be exceptions, but football seems to foster friendships that are closer and last longer lasting than those from other childhood endeavors.  The bond between football players seems unbreakable and brotherly.

3 – Pain don’t hurt.  Many people run through their lives afraid of the next thing that might cause them a little momentary discomfort.  Football players are not among them.  They have experienced so many bumps, bruises, scrapes, sprains, pulls, cuts, bites, and thwacks that an understanding develops that pain is a part of life, and occasionally needs to be ignored for their own good as well as whatever collective to which they belong.

4 – Accepting direction is a must.  If on any given play during a football game a player decides he is going to run a play other than the one called by the coach, disaster ensues.  All 11 guys on the field must embrace and execute the same concept for a successful result.

5 – Preparation is everything.  In any business or discipline, preparation is necessary.  This is a lesson that can be learned in other sports, but the penalty for shoddy prep is keen in football.  Again, both the physical and mental preparation must be an emphasis for everyone or the entire team suffers.  In other sports, a great pitcher, big man, or goalie can compensate for the laziness of teammates, but not in football.

6 – The need to take on challenges head-on.  If you avoid making a tackle on the football field, the result is a touchdown for the other team unless the ball carrier falls.  The same is true in business, but still many try to skirt issues and hope an opponent falls without any confrontation.  Waiting for the other guy to trip doesn’t work in football just as it doesn’t work in business or life.  Where better to learn that than in high school?

There are other endeavors (theater, marching bacd, swing choir) in high school where kids can learn valuable lessons, and there is no doubt playing football is not absolutely necessary for a boy to become a successful man.  But it sure provides a one-stop shop where the attributes and habits of successful people can be nurtured and friends can be made.