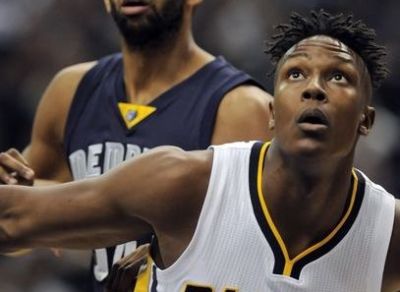 Myles Turner is one of many reasons we love watching basketball in Indiana this winter.

Basketball is Indiana’s game, and rarely have we enjoyed a season across levels as competitive and fun as this one.

Regardless of the level, basketball in Indiana has never given fans more reason for hope as the season heads toward its third act.  The Pacers could win multiple playoff series, or miss the postseason entirely.  The college teams in Indiana each has a chance to play in and advance during the NCAA Tournament – or find their way to the NIT.  Area high school teams each seem to have at least one outstanding player worth the cost of admission.

Here are the top 10 reasons basketball is at its zenith in a state that has seen plenty of great basketball over the last century:

10 – Indiana could send eight teams to the NCAA Tournament.  A couple of years ago, Indiana’s Division One basketball programs were shut out of March Madness.  It looked like excellence in the game Indiana calls its own had escaped its borders.  This year, each of the 10 programs has a legitimate chance to go dancing.  Sadly, only one of the two Summit League entries (IUPUI and IPFW) can punch its ticket, and the same is true for Missouri Valley Conference teams (Indiana State, Evansville) who can win the conference tourney but will not get an at-large bid.  Butler, Indiana, Purdue, Notre Dame, Valpo, and Ball State are also good enough to earn a spot in the field of 68.

9 – Matt Painter has rescued his own program.  The siren song of recruiting to athleticism instead of culture was too strong for Painter to ignore a few years ago as he tried to find the right combination of players to get the Boilermakers to a Final Four for the first time since 1980.  Purdue spun out of control, and appeared destined to pursue a change in leadership.  Painter responded by admitting his mistake, changing focus toward high school players he was excited about working with, and the result has been worth the wait.

8 – Yogi Ferrell is finally leading at Indiana.  Tom Crean figured out the best way to getting great leadership out of a young man like Yogi Ferrell is to take a step back.  Bob Knight did it with Isiah Thomas in 1981, and Crean has ceded enough control over the Hoosiers to allow Yogi to flourish in that role.  It might be interesting moving forward to see if the adjustment will be temporary if Indiana can’t beat Iowa tomorrow night or Michigan State in East Lansing this Sunday.

7 – Myles Turner is becoming a star.  The 19-year-old first round pick has longtime fans wondering just how bright the future might be for a guy who scored a head-scratching two points in 16 nondescript minutes not quite 11 months ago for Texas against Butler in the NCAA Tournament.  Turner appears skilled, dedicated, and determined as he continues to take big leaps forward in his development as a pro.  The sky seems to be the limit, but fans more immediate interest is exactly what Turner might contribute during a playoff run.

6 – There is no #1 team in the country.  Eight different teams received at least one first place vote in either the media or coaches poll this week.  I’ve never seen that in February.  Experts say there are 30 teams in college basketball capable of winning the NCAA Tournament, and that number is likely higher.  The lack of a dominant team means opportunity for your favorite team no matter how unlikely success might appear today.  No team in college basketball appears capable of winning six straight games against tournament caliber talent, but one will.

5 – Purdue checks all the boxes.  When Purdue focuses defensively, and shoots it well on the other end – funny how those two things are connected – the Boilermakers can beat anybody.  They have size unlike anyone in college hoops, and the wings are very capable on both ends.  Among the 30 teams that can win a National Championship, Purdue is as good a bet as anyone.

4 – High school excellence is wide spread.  Let’s not forget the high school basketball being played in Indiana.  It’s stellar.  There are potential Indiana All-Stars and high D-1 talent in almost every area gym working on their games right now as they prepare for sectionals. Kris Wilkes, Paul Scruggs, Joey Brunk, Zach Gunn, Kevin Easley Jr, C.J. Walker, Kyle Guy, Jaren Jackson, and many more are worth the price of admission and then some.  If you get especially ambitious, head south to New Albany to see Romeo Langford, who is as good as anyone in Indiana as a sophomore.

3 – Butler players are learning about more than throwing a ball through a hoop.  This season has been challenging and then some for Butler coach Chris Holtmann.  Former Bulldog Andrew Smith was taken far too soon after fighting cancer, and not a month later assistant coach Emerson Kampen’s six-month old son passed away.  Allowing his team to grieve while preparing to compete in the deep and very talented Big East has required a deft touch from a superb mentor and human being.

2 – Pacers could roll one way or another.  The Pacers appear capable of playing basketball well enough to beat any team in the NBA, or with the indifference necessary to lose to any of the bottom feeders.  Still finding a collective personality, the Pacers could head toward greatness or fall into abject mediocrity.  Paul George can thrill with versatile and devout defense, or frustrate with sloppy turnovers.  He’s nowhere near alone in being capable of both so much and so little.

1 – Win or lose, Hoosiers fans win.  For those Indiana fans who are frustrated with Tom Crean’s leadership as coach of their program, a win means their favorite team won.  A loss means that maybe Indiana fails to the point where Crean is replaced by a coach capable of getting them to the national relevance the program enjoyed when they were young.  Few can argue that Crean has been more effective this season than during any of his eight years in Bloomington, but this season could bend in a variety of ways with seven games left in the regular season.

Can’t wait to see how this season is going to end.