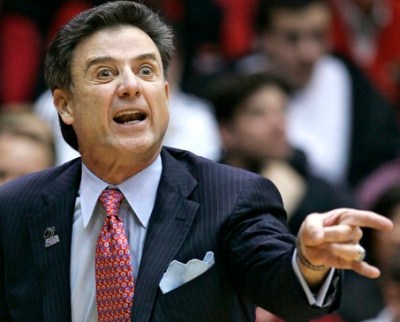 What Rick Pitino knew and when he knew it might never be known, and that is the biggest shame of college basketball’s silliest scandal

The dots that may lead from the lieutenant to the general weren’t connected, and so Louisville head basketball coach Rick Pitino will continue preparing his Cardinals for what could be a National Championship season.

Former director of basketball operations Andre McGee kept his mouth shut, and Pitino escapes with only a single failure to monitor charge in the NCAA’s Notice of Allegations that was released this morning.

For that offense, Pitino will likely be suspended for nine games – as were Jim Boeheim and Larry Brown for the same finding.

McGee was the guy who Louisville prostitute and pimp Katina Powell fingered – no pun intended – as the bank for strip shows and sex parties thrown for the benefit and players and recruits in the dorm that houses the Cardinals basketball players.  That’s where the story ends as far as the NCAA is concerned.

The NCAA cannot compel witnesses to talk or tell the truth during an investigation, so McGee was never forced spilled the beans.  That is a shame, and it could be easily corrected if NCAA member institutions agreed to empower the NCAA to enforce a lifetime ban against any player or employee who refuses to cooperate fully and honestly with an investigation.

That’s never going to happen because universities like Louisville would rather the truth not be told.  Protecting the school’s greatest marketing asset is far more important than a silly concept like the truth.

The truth doesn’t fill seats at the KFC Yum! Center and it sure as hell doesn’t hang banners.  It doesn’t write checks with a bunch of zeroes from boosters – the kind that build buildings.  No, the truth in this case would only serve to warn coaches for other schools who might be tempted to turn their athletic dorms into brothels.  It would encourage recruits and players to enjoy the same morally lax physical treatment, but without the commerce – the same way it works everywhere but Louisville.

The timing of the NOA will allow Pitino to continue as coach of the Cardinals for at least the upcoming season as it will be at least five months before punishment is determined by the NCAA.

Regardless of the length of the suspension, it won’t be nearly enough because the NCAA does not know who knew about or funded the “Hookers for Hoopsters” program at the ‘Ville.

The only answer for that silence a consequence so dire it cannot be ignored. The lifetime ban for those who refuse to cross the foul line to reveal exactly who did what and when to gain a recruiting advantage and provide improper benefits to athletes would suffice..

Maybe Pitino knew and maybe he didn’t, but until I hear to the contrary from the soldier who to this point has kept his mouth shut, I am assuming Pitino knew everything about the entire sordid business because why else would McGee be silent if not to protect his former coach and boss?

In my mind, Pitino is the whoremaster and McGee is the dutiful lieutenant, and both brought shame to a sport and university they claim to love.

Leave a Reply to The Ghost of Tom Jones Cancel reply