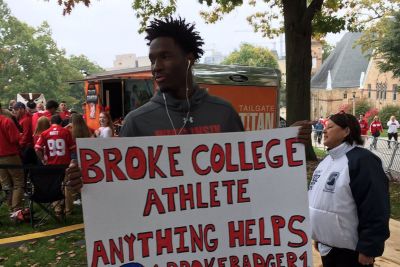 Wisconsin’s Nigel Hayes wasn’t broke, but that doesn’t mean he isn’t worth what he can get paid – like everyone else.

Universities making up the membership of the NCAA do not like change – especially when that change doesn’t stuff their coffers with cash.  They turn downright petulant when the idea of athletes earning money is advanced.

When bureaucrats and administrators get angry, they dash offs letters filled with cleverly worded threats and at least a dozen signatures – so that none can be held solely accountable for its contents.

The latest NCAA letter of outrage was addressed to Califormnia Governor Gavin Newson, who will have to decide at some point over the next week whether he will sign the state’s Fair Pay for Play Act.

If signed, the law would make illegal any restriction of athletes profiting from the use of their  likenesses or images.  Neither schools nor the NCAA would have the authority to strip eligibility or scholarship from athletes because they were paid for endorsing a product of service.

Legislation would not go into effect until 2023, which gives the NCAA a three-year window to amend its foolish rules against “student-athletes” seeking or accepting endorsements.  But the NCAA does not like advancing because state legislatures mandate their action.  That’s where the letter comes in.

In the letter, the NCAA issued the kind of threat it believes to be a nuclear option, “If the bill becomes law and California … allows an unrestricted name, image and likeness scheme, it would erase the critical distinction between college and professional athletics and, because it gives those schools an unfair recruiting advantage, would result in them eventually being unable to compete in NCAA competitions.”

Oh the humanity!  Only two California teams qualified for the NCAA Men’s Basketball Tournament last year (Cal State Fullerton and San Diego State), and they won exactly zero games.  There are other sports and tourneys, but none are revenue drivers at the level of the NCAA Tourney.

As far as college football, bowls are not governed by the NCAA.

California could slide quite easily into a flourishing eco-system without competition in NCAA national championships.  It wouldn’t be pleasant, but the 24 D-1 athletic programs in Cali could form their own organization, and move forward with a set of rules that provide the freedom of schools to allow endorsements for athletes, and maybe also pay them as employees.

If California seceded from the NCAA, would it be worse for schools in the state, or those who remain in the NCAA.  If the NCAA wants to rattle sabres, they need to vet the result if university presidents in California decide the noise doesn’t scare them.

What might scare NCAA members to its core is the advantage California programs would gain if they allowed endorsements and considered payment.  That possibility might be impossible to ignore for the membership.

The letter, with a whopping 22 signatures, closes by asking Newsom “reconsider this harmful and, we believe, unconstitutional bill and hope the state will be a constructive partner in our efforts to develop a fair name, image and likeness approach for all 50 states.”

The use of “unconstitutional” means that if the bill is signed into law, the NCAA will appeal the Fair Pay to Play Act as far out as the America judicial system will allow.

What needs to happen – and what will eventually happen – is that the NCAA will do the right thing and allow athletes to profit from their image – as is the case for virtually every non-elected official in America.

The NCAA won’t make the change because it’s the right thing to do (that never happens with bureaucrats), but because their survival depends upon it.

As always – the pain of change has to be outweighed by the pain of standing still.  California’s state legislature has introduced enough unpleasantness to get the NCAA to write a letter.  They need to keep turning up the heat.

Hunter Thompson always said, “If someone complains about the noise, turn it up.  Eventually, they’ll stop complaining.”  California seems like the kind of place capable of turning it up to 11.