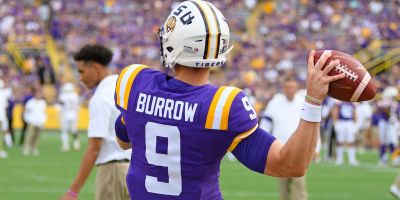 Joe Burrow is a bad example of the benefits of playing multiple sports for a variety of reasons.

[None of the below applies to freak athletes who can walk onto a almost any field or court and be the best player on it.  They are special and rules most of us need to respect do not apply to them.]

Specialization in youth sports is a topic that crops up now and then on social media, and everyone has an opinion.  Most are wrong.

Great athletes are shown as magnificent examples of the benefits of experiencing a wide array of sports.  The latest is LSU quarterback Joe Burrow, who led the Tigers to a big win Saturday  afternoon at Alabama.

Damien Woody is a smart guy and an analyst for ESPN.  He tweeted about Burrow and specialization yesterday:

They just showed Joe Burrow’s credentials & the fact he was all state in basketball in Ohio jumped out. Parents…..don’t specialize your kids!

Almost 3,000 likes and 400 retweets for Woody as I write this.  That’s a lot of people judging an important decision a kid and family share.  Comments to the tweet deride parents and coaches as selfish money-grubbers pushing kids toward an individual sport.

Burrow was Mr. Football and a first team all-state basketball player in Ohio during his senior year at Athens High School.  His versatility is seen by Woody and others as proof playing two or three sports can lead to success just as easily as specializing in one.

We hear the same refrain when people discuss Mo-Alie Cox, Antonio Gates, Anthony Gonzalez , Deion Sanders, and others who played multiple sports in college and the pros.

The truth is that Burrow is an incredible athlete, much like Ben Roethlisberger, who could have been a 20-point per game scorer had he played college basketball in addition to football at Miami of Ohio.

Yes, for elite athletes with great speed, strength, length, health and height, there are multiple paths to success in many sports.

For football players, basketball offers an outstanding cross-training program for four months during the offseason. They can also run track during the spring.  Football is a unique sport in that the offseason is mostly a true offseason.

Basketball is a different animal.  The opportunities to play are almost endless, and games run from the beginning of high school practice right through the end of July.  For those who want to play basketball In college, spring sports are out because of the importance of summer basketball.  For basketball players who want to play football, practice begins hours after summer hoops schedule ends.

Not only are there insurmountable logistical problems for basketball players who would love to play a second sport, but the skills required for the next level of basketball require almost constant training.  It may not have been that way 30 years ago, but it is now.

The point is that making a blanket statement about the evils of specialization is ill-informed.

Most parents are not selfish, and neither are coaches.  With few exceptions, they are utterly selfless – only invested in seeing the dreams of children come true.  And many times the best path toward the realization of that dream is 365 days a year of basketball.