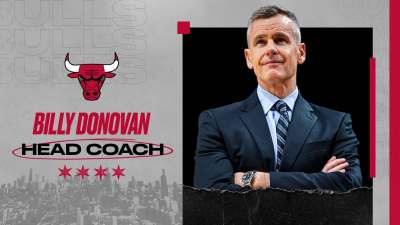 The Bulls have hired Billy Donovan – their next ex-coach.

Billy Donovan will be the next coach of the Chicago Bulls, according to ESPN’s Adrian Wojnarowski, and that’s good news for the Indiana Pacers.

His elimination as a candidate  means the Pacers will hire someone who promises something other than a redux of the Nate McMillan era.  There was nothing wrong with McMillan, but if the Pacers want something better than what he provided, Donovan was not the guy.

The similarities between Donavan’s recently ended reign in OKC and McMillan’s with the Pacers are striking.  If you eliminate Donovan’s first year in OKC with Kevin Durant and Nate’s first as Pacers head coach with Paul George, Donavan and McMillan have virtually identical winning percentages and nothing but first round playoff exits.  And both also lost exactly 28 games during this weird season interrupted.

With Donovan opting for a job outside of Indiana for the second time in four years (he was rumored to be the leader in the clubhouse for the Indiana University gig after Tom Crean’s dismissal), the Pacers will continue their search to replace a good coach with a great one because there is no point in going from good to good (or worse), right?

Fans want what they recognize, so Mark Jackson is a name we hear often in Indianapolis.  That the Warriors won multiple championships as soon as Jackson was replaced does not bode well for his candidacy.  Nor does the chief criteria team president Kevin Pritchard advanced for a successful applicant – ability to communicate with the new brand of NBA player.  Jackson is roughly the same age as McMillan, and views current players through a similar prism.

Chauncey Billups is going to be a head coach in the NBA at some point, but is now the right time?  Do the Pacers want to hire a guy who has never coached or been on the staff anywhere at any level?  He was said to be the NBA’s best natural leader during his 17-year career.  Steve Kerr has done a very nice job with the Warriors after never coaching, but he’s an anomaly.

How about Mike Brown?  Good coach with LeBron James on his team.  In a player’s league, that’s not an indictment.  He was an assistant with the Pacers when the brawl happened.  I remember him pulling Ron Artest out of the stands before he killed anyone.  He’s been the Warriors associate head coach under Kerr for a few years.

Dan Craig is an intriguing candidate.  A part of the Miami Heat organization for 17 years, Craig has learned from both Pat Riley and Erik Spoelstra.  That doesn’t necessarily mean he knows everything they do – or has the ability to lead at the level of either of those two, but it isn’t a bad thing.

Becky Hammon is a curious candidate.  If named the head coach, Hammon would be the first women in American major league sports history to coach a men’s team.  Can she communicate with a bunch of guys in a locker room?  Hammon speaks English, so I would imagine the answer is yes.  Just because we haven’t seen something before does not mean it is not the right thing, but she is certainly the biggest unknown among those listed.

Oh, and how about 69-year-old Mike D’Antoni?  It’s said the Pacers believe he could turn Victor Oladipo into the next James Harden.  That seems a silly stretch.  It’s not like D’Antoni engineered Harden in a lab somewhere in east Houston.  Harden scored 29.0 ppl the year before D’Antoni was hired, and then 29.1 the following year.

Instead of guessing at this search from the candidate’s perspective, let’s try to reverse engineer it by looking at the conference finalists to see what commonalities might be shared by the coaches of the final four teams.  The coaches are Mike Malone, Frank Vogel, Brad Stevens, and Spoelstra, All four are in their mid-to-late 40s, and spent a lot of time as an assistant coach.

Stevens was an assistant for his beloved Butler Bulldogs as he ascended to the head spot in 2007.  The other three spent between seven and 10 years as NBA assistants before getting their shot as a head coach.  Another common thread is that all are coaching teams with really good players, and have lost a lot of games without really good players.

The one thing we can be absolutely sure of is that Donovan is the wrong choice for the Bulls because hiring the wrong coach is a hard habit to break, and that is what they historically have done since Jerry Krause ran Phil Jackson out of town in 1998.  Of 12 coaches (including interim coaches) following Jackson, only one left the Windy City with a winning record.  That was Tom Thibodeau, who the Bulls couldn’t wait to fire in 2015.

The Pacers will hire a coach, and we will make a big deal about it.  There will be stories posted about fresh starts, schematic changes, charisma (or lack of it), and a bunch of thoughts about how this coach will affect efforts to either extend or trade Victor Oladipo, and how Myles Turner and Domas Sabonis will fit together within that coaches preferred style of play.

Three things will be true when all is said and done: