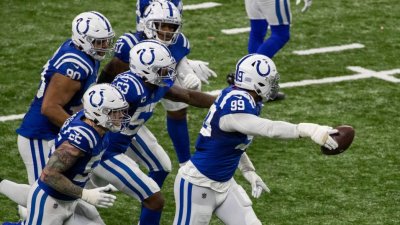 The Colts love their celebrations – let’s hope they have one more of them that the Bills in Buffalo on Saturday.

Sane people who know anything about football are picking the Bills to beat the Colts Saturday.  Even die hard Colts fans understand the talent gap between the two teams.

Being right about the Colts inability to compete with the Bills Saturday afternoon will give me no joy.  If I’m wrong and somehow the Colts can beat the Bills, I’ll celebrate like hell because I not only like this team – I respect it.

Normally, when the media gets a peak behind the curtain of a professional sports franchise to see how the sausage is really made, the result is repulsion.  Arrogance permeates offices and the locker room.  Players are self-immersed divas, instead of team committed assets.  Coaches are insecure because, like most middle managers, they are well aware they are future former employees.  General managers obsess over how they are characterized because the media doesn’t understand them, yet they make no effort to be understood.

Because of that, it’s difficult to both cover a team and cheer for them.  Trying to understand what goes on behind closed doors is a professional responsibility, not a labor of love.  That’s the case covering the Colts too, except the unseemly underbelly has been tough to find at the Colts Complex.

The Colts are unique in many ways, not just as one of the 14 playoff teams who belief in their shot at punching their ticket to the Super Bowl.

I believe Chris Ballard is not just an effective general manager, but an honest human being who is trying to construct a culture, not just a talented roster.  Not only have I never written that about a franchise leader, I’ve never thought it.  I believe Ballard is trying to build a Super Bowl level franchise with components that drive each other and the team forward.  His Colts appear to be a grand experiment that might just reaffirm that character is an asset that brings Lombardi Trophies and championship rings, not just awards for citizenship.

Philip Rivers understands his limitations in mobility and conveying the ball with velocity but believes in his ability to overcome them.  Listening to him every week on the Zoom call with media has made me a fan.  He’s thoughtful, competitive, and even a little childlike in his passion for a silly game.  This is Rivers’ last best chance at playing in the Super Bowl – an experience he has yet to enjoy.

Darius Leonard is an angry rampaging beast on the field, but an accommodating, sincere, and generous man off it.  When we were allowed in the locker room throughout the weeks prior to games before COVID, Leonard was always available to speak honestly about himself and the team.  He would talk to a scrum and then oblige every one-on-one request.  He has a sizable chip on his shoulder, and it fuels him to perform well each week.  Leonard is impossible to dislike.

Even the radio crew is wonderful.  Matt Taylor and Rick Venturi are dedicated broadcasters, but better human beings.  Their sincerity and enthusiasm explode through the speakers during games.  I have worked with both, and they have earned their success by using the same tactics common to the Colts – generosity of spirit, honesty, and preparation.  They are likable on the radio because they are likable in life.

I could go on.  There are dozens of good people working and playing for the Colts, and it makes them very easy to side with in a game against a team I know only through watching them a few times on TV.  ESPN gives the Colts a 32.5% chance of beating the Bills, but that is better than 0%!

There are hundreds of great reasons to favor the Bills, beginning with their quarterback, reigning AFC Offensive Player of the Month Josh Allen.  Forgive me if I don’t share all the ways he is expected to shred Matt Eberflus’s defense.  And as far as Stefon Diggs superior year, I just don’t care.  Worrying about how to keep him in check is up to someone other than me.  My job is to evaluate how they succeed or fail, not to game plan for the game.

I’m going to watch on Saturday afternoon like the rest of you – with hope that over 55 minutes the Colts can get enough good breaks to be within one score.  Then, they can employ all that likability, earnestness, and diligence to steal one from the heavily-favored home team.