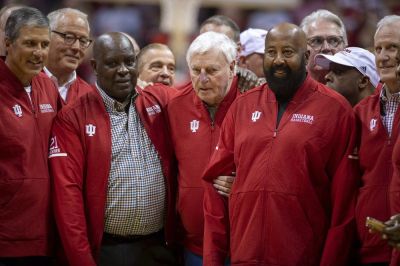 Indiana won games, conference championships, and hung banners with Bob Knight as coach. Since his firing, Indiana University has decided that level of winning is not worth the headaches.

Do you watch Indiana Basketball and wonder why it is on a never-slowing treadmill of mediocrity?

Here is the answer – Indiana University is punishing its Basketball program and its fans for the success it reaped during the Bob Knight era.

Mike Davis was hired to replace Knight, despite being entirely unprepared (by his own admission) for the challenges of the job.  Kelvin Sampson was hired to replace Davis, and he went bananas recruiting talented but behaviorally challenged players.  He broke rules, was fired, and replaced by Dan Dakich.  Too briefly, all was right with the world.  Indiana understood itself again.

Then IU decided to step outside the Knight coaching tree again to hire Tom Crean.  Until he absolutely wore out every coach, player, and recruit’s family in the state of Indiana, Crean found the right combination of in-state and out-of-state talent.  His tenure ended when it became clear his teams were evolving in the wrong direction while his ego remained championship sized.

Archie Miller replaced Crean, and the program has been stuck in suspended animation since.  Each year the promise of growth is broken, and the return to glory is delayed.  This season is still unfolding, but the results so far have been very similar to years past.

As programs at Illinois and Ohio State continue to careen toward excellence after hiring coaches simultaneous to Miller in the 2017 offseason, Indiana sits just under .500 at 6-7.  Brad Underwood and Chris Holtmann have built the Illini and Buckeyes programs that are currently ranked in the top five.

Indiana understands exactly what it is doing.  Mediocrity ensures control over a coach, and championships provides popularity that might unleash a massive ego to cause administrative torment and misery in the way Knight did.  Better to be okay in the present with the ability to sell potential for a bright future than play at a championship level.

It’s not really a matter of Indiana punishing itself for creating the monster Knight became, but more an unwillingness to venture down that road again where the basketball coach becomes a campus behemoth – the most famous and popular person in Indiana, not just Indiana University.

IU receding from the blue bloods is a contrived strategy that won’t end with Miller’s firing whenever it comes.  it will continue with yet another underwhelming hire, and another, and another.

The only hope is that athletic director Scott Dolson will be able to find a generational championship level coach whose managerial strength lies in humility, not arrogance.  That John Wooden and Brad Stevens are the only examples of servant-leaders that won big I can think of tells you a little about their scarcity.

Indiana Basketball is mired in mediocrity because of a willful decision that it should be.  The price necessary for greatness has not been paid by IU’s president, board of trustees, athletic directors, or silly blue ribbon panels convened to vet candidates each time the coaching job opens.

Future banners are unlikely to be won because at Indiana it is believed they can only be hung by self-immersed jerks who fail to understand the consequences of hubris.

8 thoughts on “Indiana Basketball – Since Knight, winning hasn’t been worth the hassle for the University”