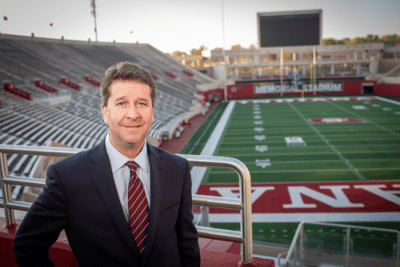 IU AD Scott Dolson has his football coach signed through 2027, but what about basketball? Can he find the right guy – finally?

It’s hard today to write about Indiana basketball, but there are obvious and unpleasant things that need to be said.  The first is that after five years of mediocrity, it’s ludicrous to make the case that a fifth year of Archie Miller as coach would spark hope of a renaissance.  But, it’s also idiotic to assign blame solely to Miller for malaise that began a year before he arrived.

There is no arguing that Miller is an ill-fitting boot for the bunion-covered foot of the Hoosier basketball, and it would do both him and his employee a great deal of good to separate.  Miller would get $10.5M in Hoosier Cash after being canned, and AD Scott Dolson would be able to look fans in the eye when he lists his expectations for the 2021-2022 season.  That is unless Miller decided to hit the bricks of his own volition, but I wouldn’t hold my breath for that!

Miller is part of the reason Indiana continues to languish in the Big 10, but he’s not the only one.  All this recession to the mean basketball began when Indiana resigned from its position as a leader among programs by instituting a revolving door system of replacing coaches without any regard to fit.

Mike Davis – bad fit.  Wanted to put names on the back of the jerseys.  Angered recruits like Mike Conley by misaddressing an envelope to Mike that contained a letter to a different recruit.  Davis also insulted Conley’s dad while watching Greg Oden work out at Lawrence North High School.  There’s more, but I like Mike and he’s doing fine at Detroit, so let’s move on.

Kelvin Sampson – a win-at-all-costs coach at a win-the-right-way school.  That he lasted nearly two years is only because Indiana’s compliance people worked at a snail’s pace in uncovering the same violations he was nearly fired for at Oklahoma.

Tom Crean – His energy burned brightly and brought great results during a five-year rebuild.  Then that intense heat started to scortch co-workers, high school and summer coaches, recruits, and fans.  He had the team cut down nets after a loss on the day his Hoosiers clinched the Big 10 title.  In the end, he could not recruit Indiana, and the results were inconsistent and in decline.  Crean failed to show up for the meeting where he was to be fired.

Archie Miller – He has not appeared to enjoy a single minute since coming to IU.  Recruiting Indiana resumed with impressive signings, but the results have yet to bring a winning season in Big 10 play or a trip to the NCAA Tournament (although the 2020 team likely would have been invited if not for COVID).  The loss last night to Rutgers might have been the final straw for Miller, who has always appeared to embrace Hoosier Hospitality in much the same way other Pittsburgh natives do – not at all.

That series of resume’ driven hires at Indiana University have caused the basketball program to crater.  The current five-year stretch without a winning Big 10 record is the longest since 1919.  You remember 1919 – Babe Ruth was still with the Red Sox, World War I ended eight weeks before, commercial radio did not exist, and the first NCAA Tournament was 20 years from happening.

Archie Miller is the latest victim of a wildly inclusive hiring strategy that allows input from everyone with a proximity card for Cook Hall,, current IU student-athlete, big money donor, or employee of Parker Executive Search.  As everyone in business knows, the bigger the meeting – the punier the results.

Over and over, Indiana denies itself the opportunity to get a coach who fits the position, and then wonders why results force yet another change.

After losing their last six games, Dolson appears to have little choice but to begin anew the process of finding a coach.  The consequences of not replacing Miller are too great to allow for another year of blah basketball without hope for anything better.  In last night’s game, the first game fans have been allowed to attend, the Hoosiers were booed for missing its usual parcel of free throws.

Imagine the boos in Simon Skjodt Assembly Hall if Dolson allows another year of uneven play to raise hopes and then crush them – sometimes in the same half!  The level of damage that could be done to the Indiana Basketball brand if the Hoosiers somehow string together a sixth non-winning season could be irreparable.  Once donors stops donating and season ticket holders stop renewing, the momentum is hard to stop.

These are troubling times in Dolson’s office.  Miller’s performance is not his to own, but if there is a fifth season of whatever this is, the money forfeited by Indiana might dwarf the COVID related revenue losses that have put the Hoosiers in a bind.