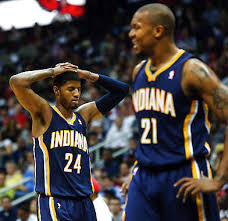 The Pacers frustration over the past two games in Atlanta can be vanquished quickly tomorrow night if they deny Kyle Korver.

Memo to the Indiana Pacers – Kyle Korver is a really good shooter.  Left open, he is almost a lock to make shots from anywhere within 30 feet of the bucket.

Korver had 19 points last night in the Hawks 101-90 win that evened the series at two wins apiece.  Because Korver was inexplicably left to wander alone the wing 24 feet away from the basket, he made five-of-eight three pointers which more than account for the 11 point difference in the game.

Defensive basketball rules of thumb go out the window when Korver is on the floor.  One step off your man for every pass it would take to get him the ball?  Forget it.  No helping off Korver at all.  Without a significant disincentive not to shoot, Korver will rain down threes like it’s his job because it is his job, and he’s damn good at it.

Basketball is a game of habits inculcated through tens of thousands of reps from the time kids start being coached at age nine, and breaking those habits requires the kind of attention to detail the Pacers showed during superb efforts in the first two games of the series.  Treating Korver like any other wing results in the kind of performance that put the Hawks over the top last night.

Josh Smith was also pretty good last night as he attacked and got to the line 16 times.  Indiana fans like the Josh that settles for jump shots a lot more than the bruising athlete who plays with a chip on his shoulder.  The guy who slept through the first two games in Indy would be very welcome back here tomorrow night.  Defending him requires effort and contact, and getting it done without fouling is a tough assignment.

Foul problems hurt the Pacers last night.  David West had to come off the court after picking up two fouls in the first 5:45 of the game.  By the time he returned, the Pacers were down eight.  When Smith got aggressive in the second half, he did it at the expense of Roy Hibbert, who fouled him five times.

The Pacers won both games one and two at home without any drama.  The Hawks looked apathetic, and the smart guys thought that the Hawks – all but three of whom will be free agents when the Pacers finally vanquish them – were looking ahead to a vacation instead of doing the dirty work needed to beat a talented team.

There is hope as the Pacers look ahead to game five in Indy Wednesday and a return trip to Atlanta Friday in the way they played in the second half of last night’s 11-point loss.  After getting to the line only six times in the first half, the Pacers managed to be aggressive enough offensively to shoot 19 foul shots in the second.

The Pacers paid for foul trouble and getting starters some rest with ineffective performances by the second unit.  Tyler Hansbrough (-10), Gerald Green (-14), D.J. Augustin (-7), and Ian Mahinmi (-15) were a combined -46 in point differential during their minutes, while the Hawks bench was a +15.

So the apparently insurmountable challenge for the Hawks that was winning four-of-five after the Pacers got off to a 2-0 lead is not quite so daunting.  Both the Pacers and Hawks need to win two-of-three to move on to the second round against either the Knicks or Celtics.  The Pacers hold the advantage with two of those games at Bankers Life Fieldhouse, but that can vanish very quickly tomorrow night.

In the unpredictable NBA, it’s impossible to predict which Josh Smith will show up – the future 300 lbs. jump shooter who defends with passionless slow feet, or the worker who draws fouls.  And will the Pacers defense recognize that Kyle Korver is a pretty good shooter?  Leaving him is a ridiculous oversight.

The series that was all but over seems to have just started.