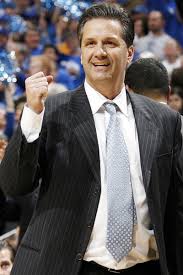 I’m not sure whether John Calipari cheats, but I know why I don’t.

Winning is not about gaining an advantage through systemic deceit – it’s the pursuit of answering adversity with grit, finding a way through the pain to outwork your opponents, motivating teammates to embrace a common cause, and subverting selfish wants for collective success.  Victory without embracing those concepts is meaningless.

Championships as a coach should not come because of the ability to aggregate talent, but because the talent that has been assembled has been able to learn and work hard enough to unlock their potential.  Talent is important, but the growth of players as human beings provides a greater legacy.

Every time I write about Kentucky Basketball, someone comments to tell me that if I were in a position to be rewarded with millions of dollars that I would cheat too.  That winning by any and all means would trump winning the right way.  Mind you, I have never directly asserted that John Calipari cheats.  People just infer that I believe he does because it fits their narrative of me as a Calipari basher.

As evidence that I do not cheat and will not, I would offer a bank statement.  I am not worth millions, maybe because I have refused to cheat.  Winning is the ability to do what I love as well as I can, not the brief validation of emerging victorious after a game of basketball, pool, Sorry!, Crazy Eights, or dominating in the ratings at a radio station.

Winning as a team isn’t about banners, but the moment years later when you look into the eyes of a teammate knowing that you shared the exultation of that moment of total bliss.

Dan Dakich had a great conversation on 1070 the Fan today with CBS Sportsline’s Gregg Doyel about the morality of cheating.  Those two make great radio every time Doyel comes on because they both hold people, including themselves, accountable for questionable behavior.  Despite never cheating, many times to his own detriment, Dan now says he would cheat if he were a player.  Both said they would take steroids if everyone else was, and not doing it would cost them their jobs.  I didn’t buy it out of either Dan or Gregg.

Norman Dale, Gene Hackman’s character in “Hoosiers”, tells Jimmy Chitwood, “You know, in the ten years that I coached, I never met anybody who wanted to win as badly as I did. I’d do anything I had to do to increase my advantage. Anybody who tried to block the pursuit of that advantage, I’d just push ’em out of the way. Didn’t matter who they were, or what they were doing.”

I used to be one of those guys.  There was nothing I wouldn’t do to win a board game, game of pool, bicycle race, or any other contest where winning was possible.

It was a miserable existence.  Knowing when a referee wasn’t looking so I could gain a physical advantage playing high school soccer was part of the game within the game, or so I told myself.  Going up awkwardly for a head ball with a talented opponent so I could knock him off balance as a penance for challenging me was a skill I developed through diligent repetition.

My goal was to be as difficult to play against as possible, and if that meant someone was injured, those were the breaks.  I never tried to hurt anyone, but there were probably a dozen times when my opposite player was helped off the field over four years of practice and games.  I knocked the best player for Trinity High School in Louisville out of a game doing that, and felt it was my duty to help us win.

I tell you that so you know that I have come to sanity through learning that winning at all costs provides a very hollow affirmation.  Cheap shots are a form of cheating, but at least they are done in plain sight, and are subject to retaliation – either from officials or outraged teammates of the victim.  The kind of cheating that takes place in college athletics is covert – executed in the shadows – but the only victims are those who refuse to cheat.

Victimless crimes provide moral cover for the cheaters.  Breaking NCAA rules has almost become a badge of honor because of the inanity of the rules.  New Auburn coach Bruce Pearl was forced out of coaching because he lied to NCAA investigators about inviting a couple of recruits to his home for a barbecue.  The home was outside the radius allowed as part of a campus visit.  The lying was idiotic.  The rule was ridiculous.

Click here to give your teeth the treat of excellent care from Dr. Mike O’Neil at Today’s Dentistry

But who the hell wants to be a winner because you were able to cheat the best?  At that point, sports becomes about finding holes in the system, rather than being a teacher, coach, and mentor to young men trying to find their way through life to understand what’s important in life and why.

Let’s be clear that abuse of the rules is an absurd standard by which to determine who cheats.  My rule book is that shortcuts of any kind define cheating, and taking advantage of the one-and-done rule is a serious shortcut for a four-year university’s basketball program.  Is it against the rules?  No.  Does it violate the mission of a university?  Of course it does, and anyone who argues that needs to take an inventory of their beliefs.

Because the NCAA has decided that bringing down the boom is not expedient for their own survival, we need to believe the moral bankruptcy of cheats is penalty enough for those who engage in it.  Sometimes doing the right thing is the only meaningful reward in a world where trophies go to the creeps.  The decision which side of that philosophical chasm we stand belongs to each of us.

In my mind, I see Calipari standing unrepentantly on the opposite side of the gorge, and for that I don’t like him no matter how nice a guy he might be.  And for that reason, Go Cards!

28 thoughts on “College Basketball – Cheaters Continue to Win, Which Means We Need to Re-define Winning”