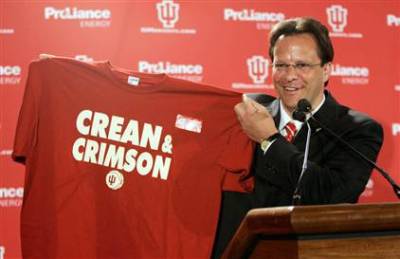 For all coaches, the day they are hired is the best, and then it’s a long slide toward the end of the road.

After losing to Wake Forest and UNLV in the Maui Invitational, it is even more important for Indiana basketball fans to remain positive – if only for their own sanity..

It’s a long season, and while that is not an item on this list of things for which Tom Crean should give thanks today, it should keep Indiana fans coming back to Assembly Hall to watch the Hoosiers throughout what may be yet another long winter filled with moments of joy and abject disappointment.

Defensive lapses were plentiful yesterday as Indiana failed to finish its work on a positive note.  Instead, the Hoosiers look ahead to Alcorn State Monday as an opportunity for redemption.

The last couple of weeks have seen many pieces written about Crean’s new found contentment and peace – as though he has entered acceptance, the final state of grief, and in that effort as he travels from Maui to Bloomington, we want him to focus on the positive.

Toward that end, we offer this list of things for which he needs to give thanks:

1 – If the Hoosiers can’t beat Wake Forest and UNLV, expectations should be quite low Wednesday night as the Hoosiers battle Duke in the Big Ten/ACC Challenge.  Playing against the Blue Demons will give IU the kind of no-lose scenario in which they have thrived in the past.

2 – That oft-discussed buyout is still massive.  If athletic director Fred Glass makes the call to change leadership with the school’s signature program, Crean will walk away with enough cash to fund his family’s expenses for quite some time.  Until June 30th, that nut is $7,5000,000.  After that date, it drops to $4,000,000.  Either way, the Creans won’t be shopping for clothes at Kohl’s for a couple of generations.

3 – Players are graduating.  If the Hoosiers have difficulty succeeding on the court, at least they are earning diplomas.  The business model in collegiate athletics demands degrees be earned by athletes, and at Indiana that happens consistently.  That is the lasting legacy of a caring college coach, not the banners that are or aren’t hung from the rafters..

4 – Indiana is capable of winning games against superior opponents.  We saw yesterday that Indiana can lose to anybody, but what will also likely be seen throughout the season is that they are capable of beating anyone as well.  This week was a time for consternation but this season will also provide some upset victories because Indiana can shoot and score.

5 – Players with physical ability to play in the NBA are drafted.  One of the things Crean does well – and this is beyond debate – is to help his players develop the physical tools to play professionally.  Upper body strength and explosiveness are added quickly by Indiana players.  Building pro-ready bodies is done as well at Indiana as anywhere in America.  As former IU players enjoy their time in the NBA, Crean should feel pride in being partly responsible for that success.

6 – Fred Glass is a patient man.  Maybe Fred’s patience is tied to the enormity of the buyout Crean negotiated a few years ago and maybe not, but Glass is a very circumspect leader who doesn’t make rash personnel decisions.  That might be his undoing as Indiana fans are edging ever closer to the indifference that would leave seats at Assembly Hall empty in the way they were toward the end of the grim Mike Davis era in 2006.  But for Crean, Glass’s unwillingness to react emotionally to seemingly entrenched mediocrity has allowed Crean to continue to call Bloomington home.

7 – It’s been 96 days since last episode of misbehavior.  Arrests, citations, and recklessness among Indiana players began with the Valentine’s Day OWI of Hanner Mosquera-Perea in 2014 and hopefully wrapped with the illegal possession of alcohol citations of Emmitt Holt and Thomas Bryant last August.  The phone ringing at three in the morning in the Crean household has hopefully stopped for good.

8 – Brad Stevens is apparently happy as coach of the Boston Celtics.  There are two steps to making a coaching change at a program like Indiana.  The first needs to be identifying the next coach who is obviously a better fit for the position, and the second is to fire the current coach.  Stevens is the obvious choice as the leader who has the best chance to be the next generational leader in Bloomington – following Branch McCracken and Bob Knight.  If emotions are indulged and Crean is fired without having Stevens in hand, who does that leave as a replacement?  Archie Miller?  Nothing against Miller, but he seems to be a very similar commodity to Crean when he was at Marquette.

9 – Media appears to be in Crean’s corner.  At least twice in the last couple of weeks, pieces have been written in local and national media painting Crean as a victim of Indiana’s mediocrity rather than its architect.  A story was told by Crean about his daughter being in a class where the professor told students Crean had been fired.  It was an April Fools Day prank. Many doubt whether the event ever actually took place.  When several students at a Bloomington North vs. Bloomington South basketball game chanted “Tom Crean sucks!” a couple of times before being quieted by school officials, it was well known within seconds.  The April Fools Day story was never heard before Crean shared it with CBS Sports Gary Parrish.  Not saying it didn’t happen, but it’s strange that a roomful of kids didn’t share it on social media, where it would have exploded.

10 – High end players continue to commit to Indiana.  De’Ron Davis and Curtis Jones are both top 100 recruits in the 2016 class and will be in Bloomington next fall.  The pipeline from Indiana’s best high school programs has been destroyed, according to several coaches I’ve spoken to, but there is still enough respect for the way Crean preps kids to play in the NBA to attract those who look at Victor Oladipo, Noah Vonleh, and Cody Zeller as role models to keep IU stocked with good players.

11 – They can’t eat him.  This harkens back to a quote from Indianapolis Colts coach Chuck Pagano a couple of weeks ago.  He was asked about his own job security, and his answer brought perspective to the strange tenuousness of the coaching profession.  Coaches get fired, and coaches get paid.  It’s a tough life, but getting fired only hurts profoundly for a little bit.  Crean is certainly aware he is not Mike Krzyzewski or John Wooden, and those are two of the very few college basketball coaches who have or will leave jobs on their own terms.

12 – Eight years is a long time.  Crean will make it through this season no matter what happens, and that means he will be the fourth longest tenured coach in IU history behind Everett Dean, Branch McCracken, and Bob Knight.  That’s a good run that has generated many moments and players for which Crean should be proud.  No one is going to erect a statue in front of Assembly Hall for Crean, but the $20+ million he’s pocketed should suffice as thanks for a job done to his potential.

This list was updated from the original, which posted Tuesday morning.  Most of the edits allowed for yesterday’s loss to UNLV.  I also changed the reference for where the Creans will not shop because of their wealth from Aldi’s to Kohl’s because my wife loves Kohl’s and I enjoy teasing her about that.