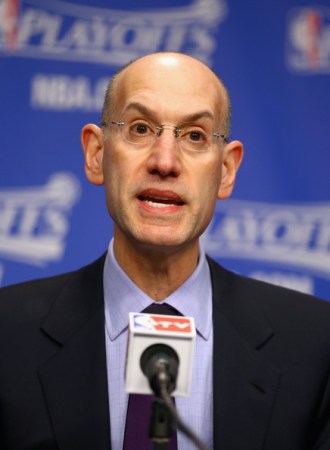 NBA Commissioner Adam Silver is the most capable league leader in America, and I’m guessing he is smart enough to enact all the changes outlined below.

Solving problems requires two steps, identifying them and correcting those rules or systems that are their cause.

The NBA is not broken.  Its robust revenue generation is causing the salary cap to explode over the next two seasons.  That success is so profound it is providing unique challenges of its own.

As with all businesses, there are obvious lapses of logic and efficiency that leave customers scratching their heads.

Correcting them shouldn’t be too hard for a major sports league that is riding the crest of a financial wave driven by wild media rights deals.

The NBA won’t be perfect as the result of these changes, but it will be much less frustrating to those who consume it in bulk.

Here are the top seven solutions to problems the NBA might not even know it has:

7 – Eliminate timeouts in last 2:00.  What i would really like to see is a complete elimination of timeouts, but I’m a reasonable man.  Timeouts waste the time of TV viewers and live spectators so that a coach can diagram a play the opposition is likely to anticipate and stop.  It also allows a team to advance the ball to three quarters court if the timeout is called appropriately.  Moving the ball without time elapsing is a silly contrivance unnecessary in building excitement.  Each stoppage interrupts drama, and eliminating unnecessary stoppages will enhance popularity.

6 – End replay.  Replay elevates the importance of the result of a call during a sporting event to a preposterous level.  The amount of time referees and video officials in Secausus take in determining whether a call is correct is one of the great inefficiencies of our generation.  Three and four minutes can pass as multiple angles are checked while viewers already know the correct call before the refs ever convene at the scorer’s table.  If a call is wrong, what’s the worst thing that can happen – the outcome of a meaningless athletic event is altered.  That happens roughly once every 200 replays.  At three minutes per replay, that’s 10 hours of fans sitting on their hands for every outcome altering reversal.

5 – Extend use of NBDL as minor league.  College basketball as a minor league is a pretty damn smart business practice for the NBA.  They get the benefit of the exposure a player receives while playing in college while the player builds a game that fits the NBA.  And it costs them nothing – not a cent.  It’s time the NBA takes financial responsibility for the development of a player prior to NBA entry.  Players will improve faster, and the money needed is pocket change for a league whose teams can afford to pay a relentlessly mediocre player like Ian Mahimni $16-million per year.  The NBA should help college basketball return to its educational function, rather than exist as a cheap and flawed de facto minor league.

4 – End draft eligibility restrictions.  If a kid is good enough to play in the NBA – or excite a team to the point it drafts him – why should an arbitrary rule be enacted to restrict his ability to earn a living?  It’s not only wrong – it’s ridiculous and racially predatory.  The only metric needed to determine whether a player is ready to earn is quality of play as determined by each of the 30 NBA franchises.

3 – Reduce the number of games.  Those of us who attend many games see contests where the effort is flagging on both sides until the last six minutes of the game.  Players jog in transition, refuse to defend, and play a nice and easy brand of basketball that erodes the brand strength of the NBA.  Games on successive nights cause a lot of the malaise we see – and are repulsed by.  It’s not the players’ fault.  The schedule is so demanding that playing hard each night is impossible.  It would be better for the brand if players were able to play 48 serious minutes every game.  With a 60 game season, they could.

2 – Change the offseason schedule.  Caris LaVert was forced to don an Indiana Pacers hat when he was selected with the 20th overall pick in the NBA Draft a couple of weeks ago.  Everyone in the world knew that LaVert was headed to the Brooklyn Nets as part of a deal that sent Thaddeus Young to the Pacers.  Thirteen days later, LaVert has not been introduced as a member of the Nets, nor Young as a member of the Pacers.  In another baffling schedule-driven scenario, Jeff Teague and George Hill are still members of their original teams until tomorrow despite being involved in a trade almost three weeks ago that sent Hill to the Utah Jazz and Teague to the Pacers.  Fixing this silliness would seem simple enough for NBA commissioner Adam Silver and his fellow big brains.

1 – Raise the max contract number.  The salary cap is exploding, but the max number for contracts stays mostly static.  That dynamic has caused an alarming lack of parity in the NBA.  Golden State finished the regular season 73-9, but was able to sign one of the best three players in the NBA as a free agent.  That’s not good for anyone but the Warriors.  As things stand right now, the 2016-2017 regular season and first three rounds of the playoffs are meaningless because fans strongly suspect that the Warriors and Cleveland Cavaliers will battle in the NBA Finals.  By raising the max number, players like LeBron James and Kevin Durant would receive an amount closer to their value, and their teams would have lesser resources to use in building the rest of its roster.  Parity would return.  Interest in the regular season would build.