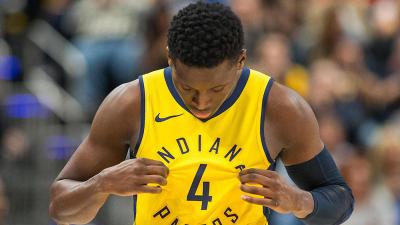 Maybe once upon a time Victor Oladipo thought Indy was “MY CITY!” Seems those days might be gone.

The NBA’s biggest problem is also one of its greatest strengths – it’s stars.

Late NBA commissioner David Stern made the decision to market the league around its best players in the 1980s.  Back then, the NBA had Michael Jordan, Julius Erving, Larry Bird, Magic Johnson, Isiah Thomas, and others to feature.  The league went from delayed network broadcasts to being must see TV very quickly.

Each of those titans of professional basketball played virtually his entire NBA career with one team – Jordan with the Bulls (minus a couple of Wizards years well after his prime), Dr. J with the 76ers after an ABA career with the Squires and Nets, Bird with the Celtics, Magic with the Lakers, and Isiah as a member of the hated Pistons championship teams.  As a bridge from the 1980s to the 2000s, Reggie Miller toiled for the Indiana Pacers for all of his 18 seasons.

As the star system matured and individual brands overtook team loyalty as the most important driver of fan fervor, the NBA made concessions that gave the players tremendous freedom to move from team to team.  The result has been a transitory system of employment for the NBA’s most popular players that makes it hard to know who plays where from year to year.

Kawhi Leonard is playing for his third team (not counting the Pacers who originally drafted him).  So is LeBron James (although he played twice with the Cavs).  James Harden is on his second team.  Paul George is playing for his third.  Chris Paul is on his fourth stop.  Dwyane Wade played for the Heat (2X) and the Bulls.  Hell, Shaquille O’Neal played for six teams.  Derrick Rose has worn jerseys for five different teams.

As stars bounce around, fan loyalty is disrupted.  As fan loyalty is disrupted, TV ratings sag.  Boy, have they sagged.  From 2012 to 2019, TV ratings dropped 45%.  That’s a hell of a problem for a league that requires significant revenue from media deals to reconcile its books.  As the possibility of limited attendance looms for 2020-2021 a sweet TV deal has never been more critical.

Even for people who follow the NBA, it’s very difficult to name a single player for teams like the Sacramento Kings, Phoenix Suns, Orlando Magic, New York Knicks, Charlotte Hornets, or Detroit Pistons.  Those franchises have no identity whatsoever, so there is no compelling reason to watch.  Quick, name the coach of any of those teams this past season!  (The answers?  Luke Walton, Monty Williams, Steve Clifford, David Fizdale & Mike Miller, James Borrego, and Dwane Casey.  If you knew Borrego coached the Hornets, you get a cookie!)

Other than a logo or a player from the 1980s and 1990s, what image do you associate with a team?  If your mind drew a blank, you are not alone.  Star level players slide from team to team with relative ease once they reach the age of 27 or 28, and prior to that employers deal them for assets to try to acquire a generational talent.

The problem was especially apparent during Pacers president Kevin Pritchard’s season postmortem earlier this week.  He spoke about the need to create a positive atmosphere for Victor Oladipo if the Pacers are to retain him.  Keep in mind that Oladipo just finished playing so poorly in a series swept by the Heat that coach Nate McMillan was fired 12 days after his contract extension was announced.  Pritchard spoke of the need to hire a coach who can communicate with this very brand-aware generation of player.

The fix for the problem is a non-starter – grabbing from players the freedom to bounce from team to team during collective bargaining.  The players would strike or be locked out, and no basketball is far worse for the NBA than star-driven, team-last basketball.

Climbing out of the hole the NBA and its stars have dug for themselves will take the kind of team-first effort it appears this new generation of players are incapable of – the very issue that caused the problem in the first place.