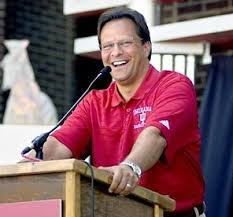 You can love him or not, but Tom Crean is coming to work tomorrow morning with intent.

Tom Crean played sparingly on his high school’s team, and did not play in college.  Yet, he earns $3.16 million per year in one of the plum jobs of basketball coaching in the world at Indiana University.

Assembly Hall is no longer home to the kind of elite basketball program that it was from 1973-1993 when the Hoosiers won three NCAA titles, advanced to eight Elite Eights, five Final Fours, and had 16 teams ranked among the nation’s top five at some point during their seasons, but it still pays really well.  There aren’t many coaches at any level that wouldn’t be thrilled with the job to which Crean lays claim.

The career path Crean has taken requires several traits – positive self-image driven by a defensive response to insecurity, unbridled ambition, and a work ethic that borders upon mania.  Most men would wither under the pressure.  Almost 18,000 pairs of eyes trained on every gesture, substitution, and strategic decision would be daunting for most who enjoy working in near anonymity.

There is a piece on IndyStar.com that describes Crean’s mood as confident less than one month after his Hoosiers crapped out on a season that held promise.  Indiana’s 17-15 record was not up to the standard of fans or the committee that decides on NIT bids.  Failing to please either, Crean took his team back to Bloomington to re-tool.

Of course, he is.  That confidence might be misplaced.  The Hoosiers might not be better next year than they were this year, but Crean will never admit to anyone – including himself – any psychological weakness  or concede failure before exhausting all resources.  If he did, his wife, the former Joani Harbaugh – yes, of the family of football coaches Jack, Jim, and John – would take measures to correct that behavior herself as she has seen how coaches succeed for a lifetime.

Weak men cannot win because they cannot lead.  Insecure men can’t communicate vision, and whether Crean’s vision is valid or not, time will tell, but he is not going to sink his own mission by allowing a milligram of doubt to enter his mind and corrupt his attitude.

Time will tell whether Crean’s plan will work often enough to please the fans and continue to attract a reasonable level of recruits, but if it fails, it won’t be because Crean torpedoes it with a case of the attitudinal jitters.

Size will be a problem next year – as will be youth.  Indiana will be without a single senior next year unless a senior transfer, like Evan Gordon last season, decides to spend a year in Bloomington, and that means that if Crean utilizes the remaining three scholarships left to his discretion, there will be no room at the inn for anyone to join the party in 2015.

According to ESPN, there are 19 players in the 2015 class mulling over offers from Indiana, including Cody Zeller-esque big man Stephen Zimmerman and former Cathedral Irish stud Jalen Coleman.  Both would look great in candy-striped britches, but without a scholarship they will land elsewhere.

Fans look to Assembly Hall, and see the Hoosiers roster bereft of meaningful size.  Crean sees the roster, plus incoming freshmen James Blackmon Jr., Robert Johnson, and Max Hoetzel, and sees the shooting that was missing last season, and with it the spacing on the offensive end that is required for players like Yogi Ferrell and Stanford Robinson to drive to the basket.

If Indiana Basketball is in trouble, you won’t see any sign of it in Crean’s words or demeanor.  He wakes up in the morning eager to attack challenges – even those he may have created himself – and his relentless self-assurances are not only needed to succeed, they are a necessary part of the tool box required for keeping this very difficult job.

You can admire Tom Crean, find his quirks too much to bear, or believe the Indiana basketball program is heading up, down, or sideways, but Crean will be at work tomorrow with a list of challenges to overcome.

Crean has very little in common with former coach Bob Knight, but one trait they share is the ability to fascinate and compel conversation.