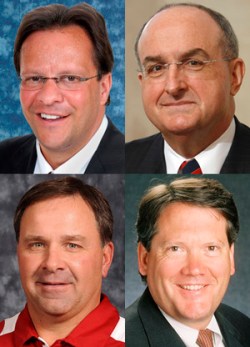 Great job by these four men getting Adidas to pony up major cash, but now the expectations are even higher.

For the privilege of outfitting Indiana athletes and associated marketing opportunities, Indiana will receive $6.7 million per year, up 81% from the previous payout of $3.7 million, according to an Indiana University release..

That places Indiana among the elite in collegiate athletics in terms of the revenue from an apparel company.

And that means the pressure on Indiana Football and Men’s Basketball has never been higher.  Adidas is not paying Indiana that level of jack because of the exposure the men’s golf and women’s field hockey teams provide the company.

This is about exposure that needs to be driven by a level of excellence that has been lacking for more than 20 years in both revenue generating programs.

Football has gone to one bowl since the 1993 season, and minus the outlier that came during the wonderful March of 2002, basketball has not advanced past the Sweet Sixteen of the NCAA Tournament during that same span.

Investment brings expectations, and if Adidas is willing to lay a stack of cash on the table that falls short of those paid to only Michigan and Notre Dame, the success and resulting popularity of the teams that generate the greatest visibility will be of keen interest for those stroking the giant checks.

Football appears to be making steady incremental improvements both in athleticism and belief in their ability to reach that tipping point where sustained respectability can occur.  Going to a bowl is treated by the players as the least of their goals for 2015 – which makes them either brashly prescient or delusional.

Basketball is different.  As one of the few schools (Duke and Kentucky are the others that immediately come to mind) where the basketball program is the marquee on-campus experience and TV product offered by a university, basketball needs to find a path to greater success than has been earned over the last two decades.

Elite money requires elite results, and the decision needs to be made at some point what level of leadership is required to build a reasonable expectation and delivery of excellence.  There is more to the equation of running a collegiate athletic program than winning – like academic progress, degrees earned, behavioral issues, etc… – but when companies invest many millions of dollars in an athletic department, participation in bowls and latter rounds of college basketball’s biggest stage should be a focus for the football and men’s basketball programs.

That puts pressure on Tom Crean, and to a lesser extent Kevin Wilson.  In 49 states, Wilson would be under the greater duress, but this is Indiana.  Basketball drives passion for Indiana University from prospective students, donations from IU alums and boosters, and investments from major sponsors.

Crean earns more than double Wilson’s total income, which is also a driver of fan expectations for basketball.

At some point, one of these programs is going to have to author success if it is going to continue to command interest from companies like Adidas – and fans.  Malaise among fans has long been a problem for football as fans tend to arrive late and leave early despite overt efforts to engage them.

Basketball fans, the students in particular, have adopted the attitude of football fans as they are prone to leaving Assembly Hall long before games end, particularly during non-convference games against inferior competition.

Passion drives the investment of the apparel companies, and the Hoosiers’ entrenched mediocrity has allowed indifference to nest in Bloomington.  Consistent winning will bring a return of the passion, which will drive greater investment.

In the short term, that needs to happen with basketball.  The selling of hope can only sustain fans for so long.  Football gets more slack because minus a nice seven-year run by Bill Mallory’s teams in the late 1980s and early 1990s, winning on a regular basis hasn’t been experienced in Bloomington since Bo McMillan led the Hoosiers.

it’s time for both Crean and Wilson (in that order) to prove they can lead their programs to an elite level.  Elite level capital investment demands elite results.