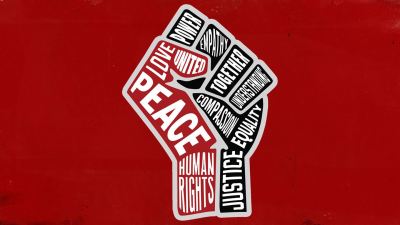 Back when I was a cynic, I would have hammered the use of four synonyms among these 11 words in Indiana University’s social justice logo. But today, it’s all love, baby!

For as long as I can remember, I have been a guy who liked to call BS on cowardly management, corrupt policies, and bad mojo.

Arrogance needed to be exposed as an unholy violation against humanity, or at least I used to think so.  Dishonesty?  It needs to be decried as the most repellent trait a person can exhibit.

Holding people accountable for lies, quirks, foibles, self-immersion, and misdeeds used to be fun.  I enjoyed being a thorn in the side of pompous asses who thought they had discovered the secret to keeping everyone from figuring out they are just as mortally flawed as the rest of us.

But I’m done with that.

I want to be positive – to find life-affirming stories that begin with an acknowledgement of our fallibility and end with an uplifting moment that allows for the hope that life can be measured by grace, reason, and generosity instead of zeroes at the bottom of a balance sheet.

My change of heart has been driven by a virtual lack of good news in media.  Between COVID, the election, and ongoing economic distress, I’m exhausted by bad news that triggers fear and loathing.

When the Colts fell behind 21-0 early in the second quarter of Sunday’s game, my mood turned dark.  Then I thought, “What the hell am I so upset about?”  A football game on a nice afternoon where 12,500 people sit and enjoy not thinking about all of the crap should not raise my blood pressure – regardless of the score.

Looking for the good seems like a better investment of my time and energy than pointing at idiots with dissatisfied sarcasm.

The tough part of this evolution is that do-gooders are outnumbered by publicly proud morons 20-to-1.  Busting balls of bad coaches who bloviate without meaningful oversight or consequence is necessary to insert some humility into their greedy and ridiculous existence, so this is going to be tough.

What makes this move possible is that the current state Indiana sports franchise leadership is very positive.  I believe Colts GM Chris Ballard, Pacers president Kevin Pritchard, Colts coach Frank Reich, and those in charge of college teams are generally good people who are handling their challenges with creativity and an acceptable amount of humility and honesty.

Butler’s LaVall Jordan, Indiana’s Archie Miller, and Purdue’s Matt Painter are well-rounded leaders aware they are responsible for the development of human beings rather than a simple stacking of college basketball wins.  Purdue Football’s Jeff Brohm appears to be a decent sort, and Indiana’s Tom Allen tells everyone “Love each other,” like he means it.

We have no idea who the next coach of the Pacers will be, but given the recent track record of hiring, there is no reason to believe he will be anything but another in a long line of good guys to deal with.  Both Frank Vogel and Nate McMillan were forthcoming and humble, and I would think whomever is next will behave likewise.

So like the radio show I hosted on CBS Sports 1430, people here will be treated with respect not derision, and stories of generosity and decency will be told.

About those I have nothing good to write or say, I will write and say nothing – just like the radio show where I avoided guests I didn’t respect.

Inflammatory and clever will be shelved for the moment – as long as my discipline holds out and Tom Crean stays in Georgia.