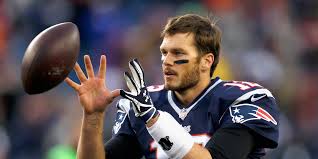 It wouldn’t be a shock if the NFL runs public opinion polling with the same regularity as the White House when determining which course of action to take in a decision like the response likely to be announced this week to the Tom Brady appeal.

Sadly, because of the vacillation the NFL has shown under commissioner Roger Goodell in adjudicating it’s wildly uneven penalties for behavior not becoming an NFL player there will be public doubt and scorn aplenty for Goodell when he announces the NFL’s response to Tom Brady’s appeal of his four game suspension for his role in Deflategate.

Former Baltimore Ravens running back Ray Rice was suspended for two games for knocking his then girlfriend (now wife) unconscious in a casino elevator.  Fans rioted, and the suspension became indefinite.

Carolina Panthers defensive lineman Greg Hardy was suspended for 10 games for his role in a suspected episode of domestic violence.  When his wife refused to cooperate with the investigation and charges were dropped, the Dallas Cowboys signed Hardy and the NFL responded by reducing the suspension to four games.

When Tom Brady was found to be likely complicit in the deflation of footballs used by the New England Patriots offense during the AFC Championship last January, he was suspended for four games, and the team was fined $1-million and docked draft picks.

As you might imagine, Brady senses a potential backlash if fans believe he cheated that might mirror those attached to baseball dopers like reviled Milwaukee Brewers slugger Ryan Braun, who was lustily booed at last week’s All Star Game, and unrepentant New York Yankee Alex Rodriguez.

A cheater is a cheater, and any acceptance by Brady of any suspension will be seen by many as a tacit admission of guilt.  If Goodell absolves Brady entirely and removes the suspension, he looks weak – like the toady of Patriots owner Robert Kraft many suspect him to be.  If Goodell stands firm on the four game rip, Brady will likely sue the NFL in federal court.

Brady is damned too, regardless of the outcome.  Outside of Patriots fans, who revere Brady, football fans see the Patriots as a renegade outfit who have exploited every possible advantage to increase their chances of winning a championship.

“Did he do it, or know it was being done?” aren’t the most relevant question regarding Deflategate.  It’s not even whether it was done at all by those Patriots ballboy rubes who were in charge of the balls.  The real question that will guide Goodell’s decision is the exposure for the NFL each possible option potentially presents.

The NFL is exceptionally sensitive to public outrage, and the path of least public resistance has been the one followed for the majority of Goodell’s reign as the czar of America’s league.

That path is a reduction of the Brady suspension to two games, and so it will likely be.  Holding at four would be out of character for a commissioner who reduced to four the suspension for Hardy – a guy who was accused of throwing his girlfriend to the floor and into a bathtub, slamming her against a Futon and “strangling” her during an argument at his home.

Goodall finds himself in the unenviable position of having choices which would each be viewed as flawed, regardless of which he opts for.  He’s like a contestant on “Let’s Make a Deal” where doors one, two, and three each conceals a goat.

For Brady, the oafishness of the NFL’s disciplinary wing has made him appear more and more sympathetic, which is quite a trick.  The Patriots continue to find new ways to annoy the fan bases of the other 31 teams, while thrilling its own, and even fans predisposed toward booing Brady are starting to view him as preyed upon by incompetents.

Whatever happens, those who dislike Goodell and Brady will have plenty to carp about whenever the decision is announced, regardless of what it is.

One thought on “Deflategate decision – With the NFL the goal is always prudence, not what’s right”